Our Spring runner’s seminar series was a success. We’re doing it again. The Fall seminar series will be presented by Dr. Jon Carlson at Champion Sports Rehab. He has some really great topics that I think will be of great interest to many in the club. All seminars will take place at the State College Area YMCA and the cost is only $5/seminar for NVRC members and students ($10 for non-members). The events are on our Calendar online: http://nvrun.com/index.php/community/calendars

If anyone has any questions, please email Cheryl at This email address is being protected from spambots. You need JavaScript enabled to view it.

Join the Wahoos as we train for an 8K loosely using a popular Training Guide for Novice Runners. See Calendar below!

We had a great run yesterday. Seven people showed up...we ran a little over 3.5 miles (although Adam was sure to remind me that he ran more because he was running circles around us !) and the picture I took was trying to capture one member that has been working toward a goal. This was her reaching it...a bit of a "Rocky" moment for her. I'm really pleased at what this group is doing for people's motivation and stamina. Having repeated runs at the same park is helping people set realistic goals and track personal records. I don't quite have the time to write a cute and funny email like the other runners, but perhaps someday I'll find the time! 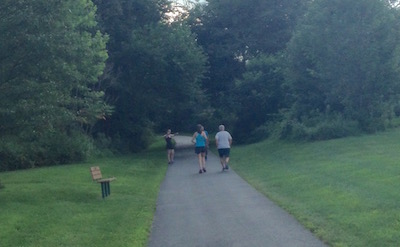 If you have children who are interested in cross country training this fall, please see below:

The goal of the program is to create a positive and fun atmosphere for youth to learn the the basics of distance running and cross country as a sport. The program promotes active lifestyle and encourages the kids to set goals and develop skills and commitment to work towards those goals over the season. Both beginners and experienced runners are welcome.

More information is available on the NTF website: www.ntfxc.com or you can email me any questions at This email address is being protected from spambots. You need JavaScript enabled to view it..

Wait…isn’t that a trail race?  Break out your finest metal mug filled with instant coffee, throw another log on the campfire…and prepare yourself for another looooong winded email.

So a few of us roadies thought it would be fun to test our legs on some trails and see what it’s actually like, so that we have some clout to make fun of trailer runners instead of just picking on them for fun.  In talks with some of my trail running friends (or the ones that put up with me) it turned out that Sproul would be a great beginner trail race.  I wanted something runable rather than a rock climb, and also wanted something far enough away from marathon/fall season so that I’d have time to heal after I hurt myself since it seems every trail runner gets hurt every other time they run.

Sproul 10k course is a 3 mile climb follow by a 3.7mi descent.  Hold up…3 + 3.7 = 6.7.  Apparently math isn’t a strong suit of the trail people, because every 10k I’ve ever run is 6.2mi.  I guess this is more of an ultra 10k?  Or maybe since the times are so slow they can use the “oh that’s because its longer than a road 10k” excuse.  Eh..whatever.  I’m still going to run this thing.  So hearing about its grueling front half climb, I figured I’d used the weekly hill workouts as my Sproul training and I’ll be set to show these trail folks how to run their races.  I’d worn my road shoes out and needed a new pair, so I bought a pair of Patagonia trail/ultra shoes…to help me fit in on race day.  And for good measure I went to Shingletown gap once to run with the Thursday trail crew, to round out my Sproul training and hone my trail skills.

Tired of the same ole hills, the crew set out to explorer new hills to test their legs on. What seemed to be a large hill workout group starting from Rec Hall, quickly dwindled down to a smaller number. Some runners were scared of anything new, some had to get back to work, some had to train for the Pikes Peak half marathon by not running any hills, and some claimed to have already completed their lunchtime run (although judging by the lack of perspiration, I’m guessing they too were scared). Thankfully the entire group wasn’t as nervous as the rest, and we headed off towards the Toftrees Trail to find this new hill, which had been previously deemed to be a mere 1.5 miles from Rec Hall.

2.5 miles later, we arrived. The hill is a nice single switchback, not too long, not too st! eep. A great newcomer hill to add to the repertoire. Confronted by construction equipment, box colverts, crushed stone, dirt, retaining walls, and confused construction workers….the crew wasted no time getting to work. Shovel Senior, Steamroller Zimmerman, BellefonteBackhoe Shafer, Excavator Maquire, Dozer Davis, Mechanic Martin, Wideload Weyandt, MackTruck Minard, Caterpillar Cornwall and Rusty Renz sped up the hill. What they weren’t expecting was the rain from last night turning the hill (a gravel construction road) into a soft and sometimes squishy terrain. Some places were extremely soft, sinking your shoes an inch into the mud/dirt as you pushed off to climb up the hill at a surveyors pace. The most busy of the group constructed 5 repeats, while the more jobsite managers of the group were happy with completing 3 or 4 repeats, knowing that they are the boss and could simply record that they did more.

Due to the distance of this hill from Rec Hall, we may not hit it too often, but it is a decent short climb / high volume workout for anyone looking to conquer some hills in their spare time. Next week we shall find something a little closer to home so that we can complete a more fuller set of hill repeats. In the mean time….make sure to not avoid any hills on your normal runs!

It was a little like herding ducks to get everyone together for our second Cherry Run Trail run. It's a bit of a field trip (all the way out to Lamar!), and the weather of late has been "nice weather for ducks", but I had thought that the prospect of lunch at Elk Creek Cafe would have made this an automatic on people's schedule. Still, there was a lot of hemming and hawing and unresolved schedule conflicts. But by the time the run started, there were 7 runners that were there to do the whole loop, plus another runner who'd meet us at the end and another who'd meet us at Elk Creek.

The Cherry Hill Trail is well described in my report of a family hike a few years back. It's a beautiful, mostly forested run. Rocky, but not too technical (i.e., nothing like Rothrock), with some modest climbing. The big thing is that the tail end of the trail can be muddy, and our recent rains made the last few miles the muddiest I've ever run through on that trail. Still, nobody's shoes were sucked off their feet by the mire.

Lunch at Elk Creek was excellent, as was to be expected. The beer was magically cold and delicious after the 10 mile run. Everyone said "We HAVE to do this again." Keep a lookout for a couple of dates, maybe in August and early autumn. 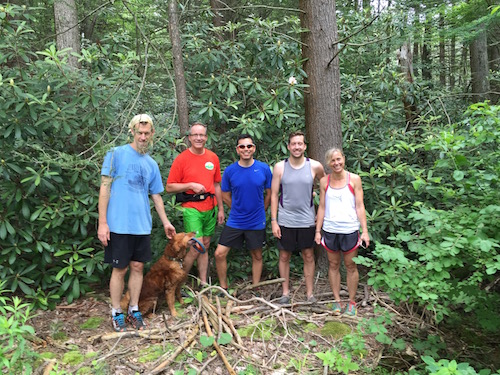 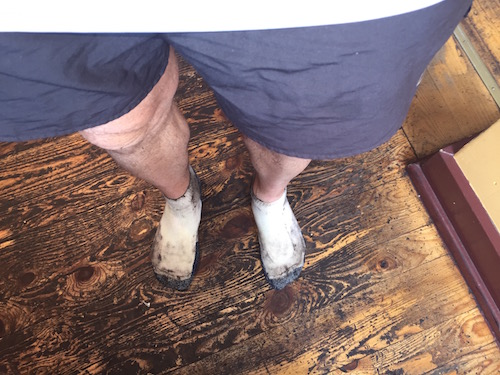 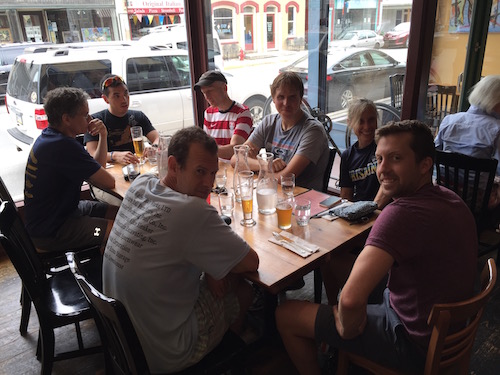 Pilsners and Pale Ales are emminently guzzlable after a 10 mile run.