Serious rains cut through the forest the night before the race and super-mild temperatures kept up for race day in central Pennsylvania’s Moshannon State Forest for the sixth annual Allegheny Front Trail Runs. This was year two for the Hemlock Half Marathon course and the third year for the Seneca 50K course.

Buckets of rain in May and June had made the vegetation go crazy, so extra pre-race trail care was done and the course looked breathtakingly lush.

The Seneca 50K Run (almost 32 miles) features some steep climbs and technical descents, including a northwestern part of the AFT, with seven aid stations.

“Miles 15-25 of the race seemed a bit more technical than the rest, so I had to work a little bit harder than I was anticipating to keep my pace going appropriately,” recalled Litofsky. ”There were a couple climbs in there that I wasn't expecting, so I had to power hike a bit to make sure that I wasn't going to blow up. At about mile 25, I realized that Adam Russel's record from last year was still in reach, so I tried to push myself through those last 6-ish miles, and even though those miles are pretty fast, I wasn't quite able to do it.”

Yokum came in knowing only the front end of the course. “I tried to start out the race at a pretty swift pace, since I knew that the first six or so miles would be flat. For the first 45 minutes or so, I had Cheyenne [Albert, of Morrisdale] and a rather tall man [Charlie Vasey] right on my heels. I was feeling good, strong, fast and confident, although I had a really hard fall on a slippery wooden bridge just about one mile in. After the initial flat part and until about mile 18 or so, I just felt that I was having a bad day because so many things were going wrong.” Among them, Yokum had donned almost brand-new trail shoes and kept falling. Then a little further in, things shifted, and her confidence and power returned. “I caught and passed Cheyenne on a long, slow grassy uphill. From there, I just tried to cautiously gain speed and have a strong last third of the race. I felt really good at the end, like I actually had a lot left and could have pushed myself harder. That's not a great way to feel at the end of a race, but it's a funny thing about ultras that you sometimes don't know if you'll suddenly run out of steam so that the last 4 or 5 miles, which should seem like a short distance to go, might become an eternity.”

In the end, Albert finished just 5 minutes back of Yokum and fourth overall, and Kristen Gonyaw, of Julian, was the third woman.

The Hemlock Half Marathon Run is a 98% trail course, 93% single track, with three aid stations.

Norb Baier, of Port Matlida, won the race, with Joel Strouse, of Loganton, and Scott Matson, of Philipsburg, taking second and third. Baier had run the course earlier in the week, “so I knew when to hammer down and when to hold back.”

Oyler recalled a high-energy day. “I was pressed early on in the race, especially on the steeper downhills where I take too much caution. I was passed a couple of times by guys able to let go and take a hill in a few strides. This forced me to open up more than usual, but then I also hit the climbs hard to make up for it. The second half was a mind game. There was a long stretch where the elevation was relatively flat, but the trail went through a variety of terrain - slick mud and rocks, logs, loose boards, clumpy grass. It was tough to keep a steady pace and I thought for sure that I was losing ground. I was in 2nd place (female) up until this point and thought I was going to lose that spot, let alone catch up to first. My energy didn't fade, though, so when I spotted the first female about 30 yards ahead at the last aid station, I knew I had the win. The course was awesome!”

Trail care on the AFT is a group endeavor and great fun. Watch for announcements to take part in trail prep next year. Proceeds from these races support Crosswinds at Mid-State Airport, a volunteer group dedicated to promoting general aviation and encouraging recreation on area trails, and the Keystone Trails Association. 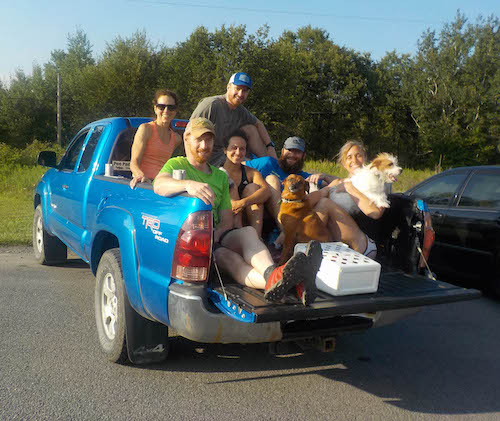 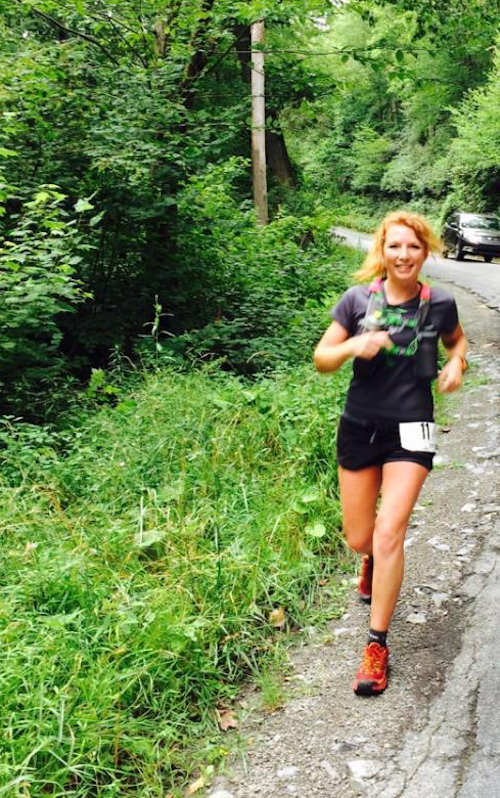 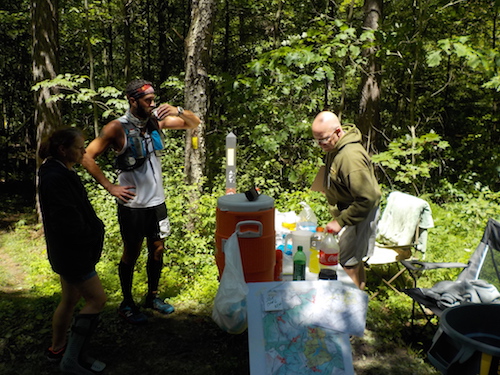 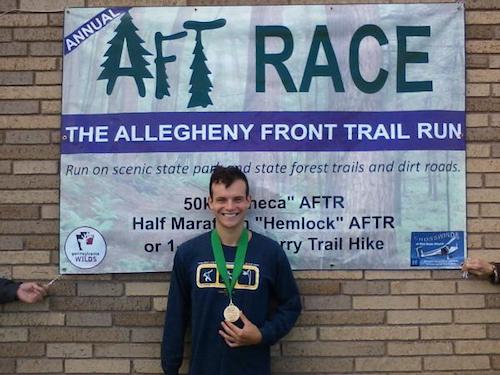 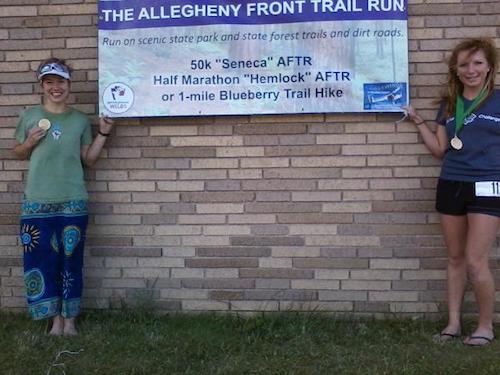 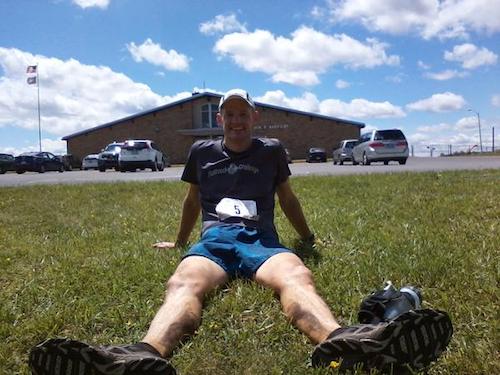 Charlie Vasey takes a moment to recover after the 50K 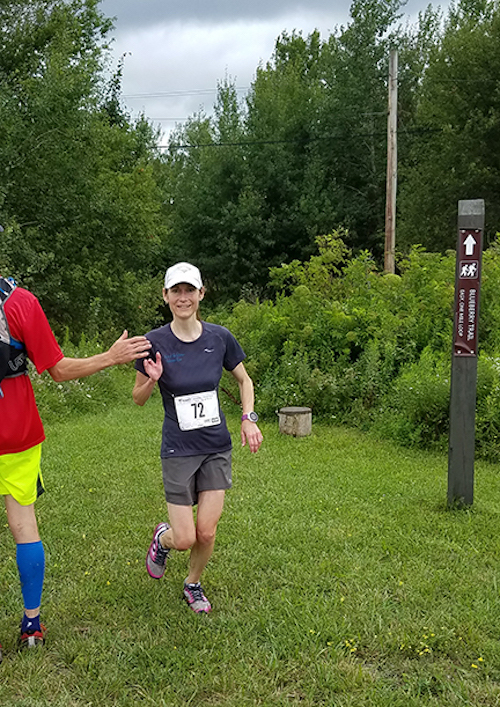 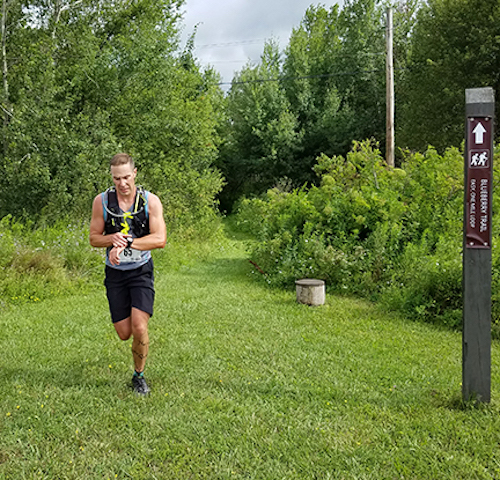 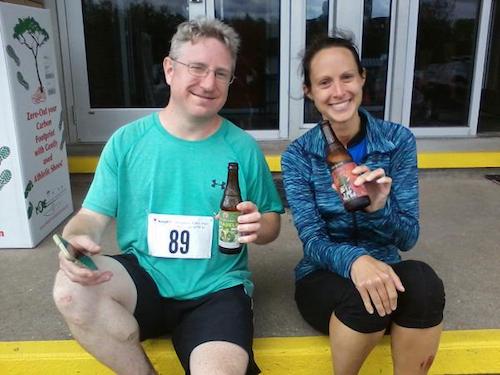