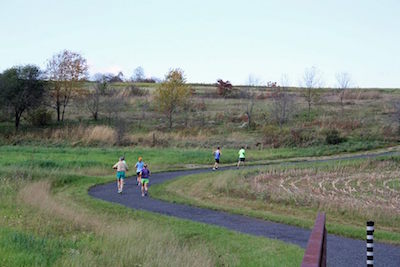 Marathoners For Medicine Team Surpasses $500,000 In Donations for CVIM

Twenty-six runners participated on this year’s team by competing in a spring marathon or half-marathon. Tom Cali led fundraising efforts with $7,500.00 raised for CVIM.

The Badwater Ultramarathon In January

Jeff and Jim Smucker and Marv Hall completed the 134 mile Badwater Ultra-Marathon course in a leisurely 4 days. Rather than stick his research in a file, Marv is making it available to others that are looking for something different to do for a break from the normal winter runs. Marv thinks there are others that might like to do the Badwater course in January rather than July.

Jeff Smucker keeps a blog of his ultra adventures. Here's the blog. Jeff's January 2013 writings were all about the trip and go into the adventure in interesting detail with lots of pictures. They're in reverse chronological order, so start from the bottom.

(The graphics from Marv's reasearch are too big for the formatted page. Shrinking them wouldn't do them justice, so click to continue...)

I signed up for 26.2 with Donna because of my mother. She had run the full marathon once and the half once, and was coming back for a third year. I didn't qualify for Boston, my usual spring marathon, so I decided to go down to Jacksonville Beach, Florida in February for an early spring marathon.

My mother first signed up for this race because it has Galloway (run/walk) pace groups. She trains with (and recently became a group leader for) a Galloway training group in Atlanta. During this year's race, she got to run with Jeff Galloway for a while, and talked to him at the post-race party. (She also won her age group!)

With about 6,000 runners in the full and half marathon, this isn't a big city marathon like New York or Boston, but it has a lot of amenities. When I landed in Jacksonville, I was greeted by friendly volunteers at a 26.2 with Donna table in the airport. The expo, held in a train station turned convention center, was big, with a nice variety of vendors. In addition to the usual running-related vendors, there were many booths related to the event's focus, breast cancer.

The bike path along the south side of the Penn State golf courses is a favorite route for bicycling commuters and for runners getting their lunchtime exercise. You're off the roads, on a soft surface, and you've got great scenery. But the shrubs and vines along the path do tend to get overgrown and occasionally need to be pruned back. This helps visibility for bikers so they can see and avoid slower runners and walkers, as well as the occasional groundhog and bunny. Cheree Jones and Sheryl Balkey recently organized a crew from SF & Company to get this job done as part of the United Way Day of Caring. The NVRC pitched in by sending a cash gift used to pay for refreshment for the crew. Here are a couple of pictures. 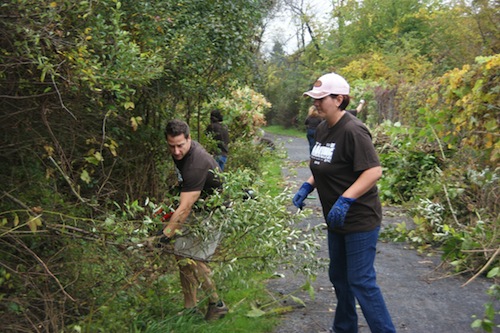 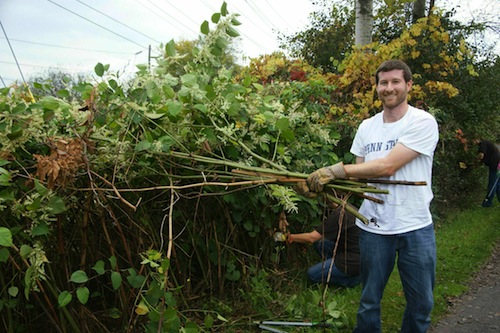