I led a group run up the Musser Gap trail on October 10. I had advertised the run as one that might entail some bushwhacking, particularly if we wanted to get all the way up to Tussey Ridge, the high ridge just south of the gapped ridge that Musser Run flows out of. The last time I ran to Tussey Ridge from Musser Gap, back in December, I’d made a nearly vertical assent because of almost non-existent trail marking. That was some tough, and treacherous, climbing, so if the group consensus was against that kind of adventure, we’d have just run in the sun along the power line cut in the saddle between the ridges.

But when we got to the log footbridge across Musser Run a mile up from the Rothrock parking lot on Rte 45, I noticed a brand new DCNR trail sign that wasn’t there even a couple of months ago. As we progressed through the gap, more new signs. And when we got to the power line cut, there was a new sign for a trail to Tussey Ridge. We decided to take the adventure. The trail to the ridge is, like most trails on the higher ground in Rothrock, pretty rocky. But it’s a trail, with enough switchbacks to greatly reduce the risk of teetering back and going ass-over-teakettle down the mountainside. The trail is pretty obvious in most places, and well blazed where it’s not. Getting to the ridgetop is strenuous, but not dangerous. The total climb from the lowest point on the run (the bridge across Slab Cabin Run on the greenway path near Rte. 45) to the top of Tussey Ridge is just under 1000 feet over 2 miles.

The best thing abut the Musser Gap trail is that it’s right in our back yard. From Orchard Park, at the corner of Blue Course and Bayberry, to the top of the ridge is 3.6 miles. If instead you start your run or hike at the Rothrock lot, it’s just 1.7 miles to the top. At Tussey Ridge, the Musser Gap trail T’s into the Midstate Trail, and from there it’s possible to get to all the other trails in the Rothrock system. I ran from home, and out and back was under 9 miles. A very pleasant part of the run is the path through the Musser Gap Greenway, a strip of gently rolling farmland between Whitehall Road and Rte 45 that will be developed over the coming years as a recreational space including trails and parkland. (More on this in an article on the Greenway from last year's ribbon cutting ceremony.)

Directions: From Orchard Park, run up Blue Course Drive to Whitehall Rd. Make a right. Run on Whitehall for about 200 yards and cross at the first unmarked gravel lane on the south side of the road. This lane goes through the Musser Gap Greenway farmland between Whitehall and Rte 45, and offers some stunning views of the valley. A mile and a quarter later, the path crosses Rte. 45 and continues to the Rothrock parking lot. (This parking lot is just under a mile east of the intersection of routes 45 and 26 on the south side of Rte. 45.) At that point, there is a gate barring motor vehicles and the path continues up the lower ridge. Just under a mile from the lot, a log bridge crosses Musser Run and the path continues through the gap as a steep trail. There are several other marked trails in this area, but following the Musser Gap trail, you’ll eventually end up at the power line cut in the saddle between the ridges. At that point, there are markings for the Musser Gap trail to continue to the top of Tussey Ridge. 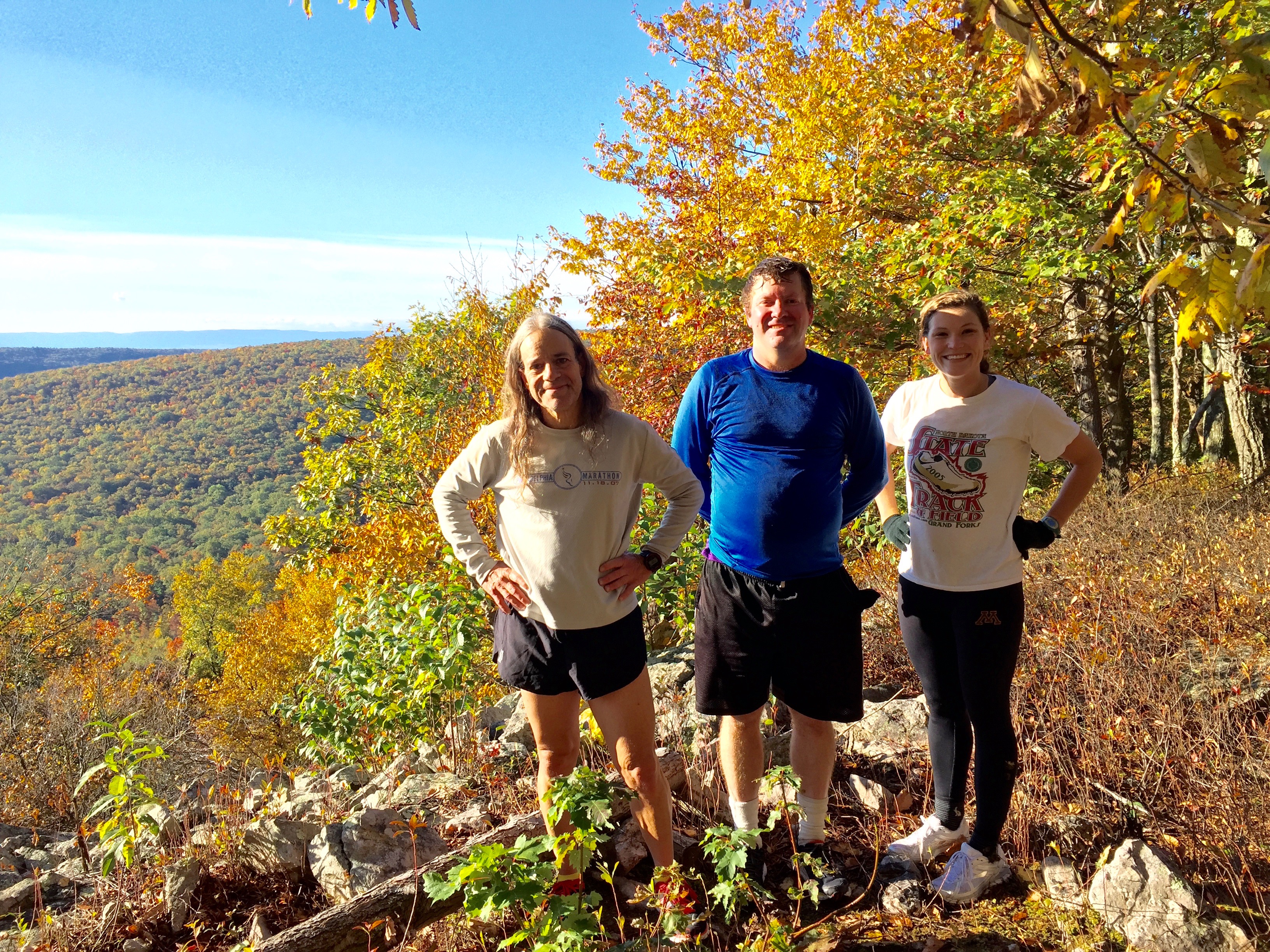 Fall foliage in full display on Tussey Ridge at the intersection of the Musser Gap Trail and the Midstate Trail. From Left: Michael Goldfine, David Lloyd, and Tari Helmers.

Here is a link to my Garmin record of the run. (There's a little back-and-forth in the early part of the run near Orchard Park where I ran back to pick up some latecomers.):