Minutes of the February 4, 2014 meeting of the NVRC

The club officers instituted a new format for the December 2013 NVRC meeting, with the board meeting at 6pm to conduct business and the regular meeting beginning as usual at 6:30. The format was maintained for the February meeting.

2014 race series: We had some glitches with the 2013 series, but Jake got the final standings and we are giving away a lot of prizes - awards to the top 3 as well as smaller awards (magnets) to deeper levels. In the volunteer series, prizes were given to various levels rather than awards. Jake plans to do the 2014 series data in Excel so that it is more easily shared with others.

Membership year: It was proposed to change the membership year from July-June to January-December, in order to align with the race series. We need to check the bylaws to see if a change is required. Our RRCA renewal comes up in December and this is when we report membership numbers for insurance purposes. Marty Klanchar proposed sending reminders at the beginning of November and asking for renewals by December 1. We would keep membership rates the same, and comp everyone 6 months from July to December 2014. Tara suggested offering an option to roll membership into the NVHM registration. All present were in favor.

Race registration:  Dave reported that he is looking into alternatives to Active.com and will report back.

Knights of Columbus 5K: This was a club race until Josh Cone of the YMCA took it over last year. Josh is now willing to give the race back to the club if we want it. We would need a race director. Josh is planning a mile race for the fall so we would want to coordinate with that.

Volunteer opportunities: If you are interested in being the club apparel coordinator or directing the Knights of Columbus 5K, contact one of the club officers.

Race series: A list of events for the 2014 series will be sent out soon. The NVRC blood drive and other community events like volunteering for youth XC races will be added. Marty Mazur presented awards for the race series and volunteers. 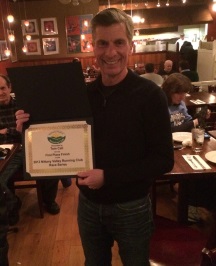 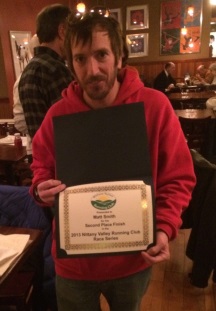 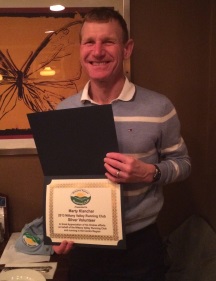 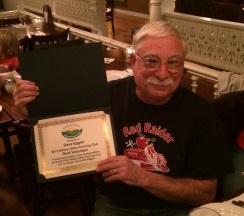 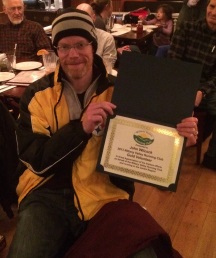 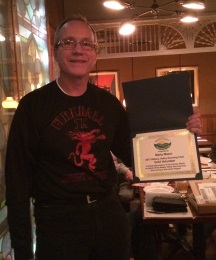 Marathoners for Medicine: The Centre Volunteers in Medicine Marathoners for Medicine fundraising team will have a kickoff dinner Feb. 13, 5:30pm at St. Paul's. Media Day will be March 20, 5:30pm at Rec Hall. If you are running a spring full or half marathon and would like to help raise money for CVIM, contact This email address is being protected from spambots. You need JavaScript enabled to view it..

Dan Guss is working with someone who wants to start a charity race. Marty Mazur will send Dan information for race directors. One possibility would be taking on the KofC race.

Herbie's Home Town Loop: Kim Gasper reported that the race will be held Aug. 16 and will again include both a 4-miler and 10-miler. Kim also reported that the Bellefonte XC team will do a fundraiser for CVIM in mid-May, running a marathon as a team on a 1-mile course.