The crew headed through the Vatican City (the neighborhood behind OLV) for the 12 Days exhibit, then got on the bike path to Stonehenge. But they were too late for the Winter Solstice sacrifices. They thought of dropping by Tom Cali's house to pester Esther (Tom was at a CVIM Board Meeting, followed by a penmanship class), but decided to head straight to Sheakoski's house. There, the group was greeted by a Scrooge-like visage who turned a deaf ear to their pleas for beer. Disappointed, but undeterred, the runners wended their way slowly down the hill and into Marty's neighborhood, where they were warmly accepted for cookies and a wee nip at Bwana's house. After a round of bourbon, the runners did a jolly jig as they headed back to the High School parking lot to get their rides home.

A great time was had by all. Stonebridge had the best lights and Bwana's street (except for Bwana's warmly inviting pool of light), the worst. Next year, Bwana will provide bunny slippers and brandy snifters for all. The group might never get back to their cars.

We're trying out putting photos from Flickr on the website using tags. This will allow anyone that took pictures of an NVRC event to upload them to Flickr, tag them, and have them appear on the web page for that event. See the Arts Fest pages for examples and the following for instructions:...

Katie Visco's Run Across The USA

Katie Visco is attempting to be the youngest woman to run across the USA. She started in Boston in late March and hopes to reach San Diego before Christmas. On May 16, Katie passed through State College with an escort from the Nittany Valley Runnig Club. I took some pictures, which are in this album on Facebook. 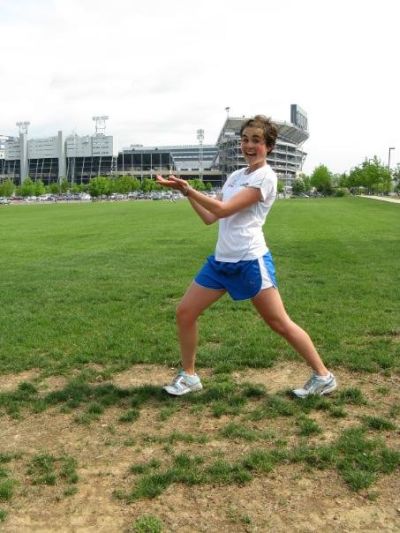 You can read more about Katie and her trip at her web site: http://www.paveyourlane.com/. There's a post in her blog there with her impressions of State College and the NVRC. And Tara Murray summarizes the recent spate of blog posts on Katie's run here.

More than a challenging run took place at the Tussey mOUnTaiNBACK 50 Mile Relay and Ultramarathon, host of the American 50 Mile Championships in October in central Pennsylvania’s Rothrock State Forest. The event also raised $5,000 for a State College based nonprofit organization, Centre Volunteers in Medicine.

Race director Mike Casper presented a check to CVIM representatives on Tuesday evening at the bimonthly meeting of the Nittany Valley Running Club at Hi-Way Pizza, 428 Westerly Parkway, in State College. Top individual and team fundraisers were also recognized. Photos of the presentations can be seen at the meeting minutes.

Centre Volunteers in Medicine serves the health and wellness needs of qualifying medically uninsured Centre County residents and their families. “We are thrilled at the enthusiastic support shown by participants of the Mountainback race,” said Executive Director Kristen Houser. “CVIM depends on support from community organizations and events such as the Mountainback to provide medical and dental care to our uninsured neighbors in Centre County.” A number of the agency’s staff, volunteers and board members volunteered or took part in the event.

Join the NVRC - Now You Can Do It Online!

You can now join the Nittany Valley Running Club, or renew your membership, online. It's easy to do. And a great deal. $10 per year helps support all the great races, activities, and youth programs that our Club sponsors. There are multi-year and family discounts. The online sign-up is handled by Active.com, and so there is a small convenience fee for this service. But it sure beats trying to remember to renew by mail, let alone tearing your house apart looking for a stamp! Click here to join or renew online. (You can still join or renew by mail by filling out and mailing in this form.)