The Annual State College Christmas lights run was another success. With the opening of Hi-Way Pizza West, formerly the West Side Stadium, the event was moved back to its old start-finish point. Twenty runners and a dog gathered outside HPW on a mild and breezy evening. Despite going back to our old digs, we changed things up a little bit on the run itself. Instead of heading over to the 12 Days of Christmas neighborhood display on Sparks Street for our first stop, we decided to view the crazy computer-driven display at a home in Foxpointe. Thankfully, the night was warm because it was a long way, over two-and-a-half miles, to get to the home. We could tell when we were getting close because of the line-up of cars waiting to see the house. Fascinated and spell-bound, we stared at the display for a good 15 minutes despite the fact that no one had a radio, so we could not hear the accompanying music. (Weird in this day and age that everyone had a cell phone, each with billions of transistors, that can pick up streaming FM stations via the internet. Yet we were music-less because the low-power home-broadcast FM signal was not on the internet, and nobody carries around a transistor radio, a pocket device made with just a handful of transistors that was ubiquitous 60 years ago!)

After visiting the silent (for us) display, the plan was to head back by way of the Stonebridge neighborhood, which always has some good lights, with one house in particular setting the neighborhood standard. But engrossed in runner conversation as we were, we missed the turn and decided after all to head straight for Bwana's liquor cabinet (or "liqueur cabinet"). Casa Bwana, the always appreciated last stop, promises cookies, fruitcake, and a nip of warming hootch. This year, Bwana offered, besides the usual bourbon, some Krupnik, a strong honey-flavored Polish liqueur. (Note on a distinction: bourbon is a "liquor", in other words a distilled beverage, and specifically a whiskey. Krupnik is, like schnapps, a "liqueur", which is a strong drink made from distilled spirits, but flavored with other other ingredients and further sweetened.)

After imbiming and en-cookie-ing, we headed back to Hi-Way Pizza West for beer, pizza, and wings, and some great conversation. Bwana passed the hat and raised $150 for the State College Food Bank. 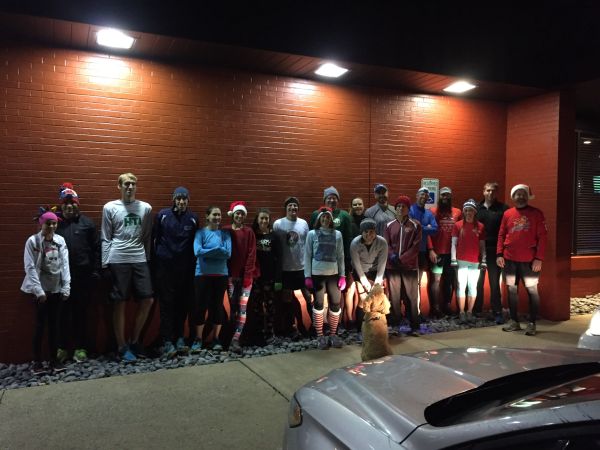